On Saturday the 26th of October, Wellington Palestine activists – and Palestinian rights activists in Christchurch and Palmerston North – took part in an international day of action against the German sportswear company PUMA. The action was called for by the international BDS movement and over 200 Palestinian sports clubs and associations.

Why were we targeting PUMA? Because the company sponsors the Israel Football Association (IFA) including six Israeli football teams based in illegal Israeli settlements in the West Bank. When Adidas backed out of sponsoring the IFA in 2018, as the result of an international BDS campaign, their rival sportswear company stepped in.

At the heart of the issue is that the football teams the IFA allows to play in the West Bank are located in occupied territory in violation of both international law and the rules of football’s global governing body FIFA. Through its agreement with the IFA, Puma is not only helping to normalize this situation but is also profiting from it.

By sponsoring the IFA, PUMA is contradicting its own code of conduct and its position as a signatory of the UN Global Compact, both of which commit PUMA to upholding human rights.

Palestinian football associations and individual athletes are concerned about the support the IFA gives to football teams in illegal settlements on stolen land. They also recognise that the IFA and PUMA are complicit in crimes by the Israeli state against Palestinians. Mahmoud Sarsak, a Palestinian footballer who played for the Palestinian national team, was arrested in 2009 while crossing from Gaza to the West Bank to play a match. He was tortured, held for over 3 years without charge and eventually released after he went on hunger strike for 95 days.

Just a few weeks ago, in another political intervention into the world of sport, actions by the Israeli government led to the cancelation of a major Palestinian national football club event known as the FIFA Palestine Cup. A match between clubs in Gaza and the West Bank, was called off when Israel, without offering any explanation, denied travel permits to the Gaza team.

What can you do? 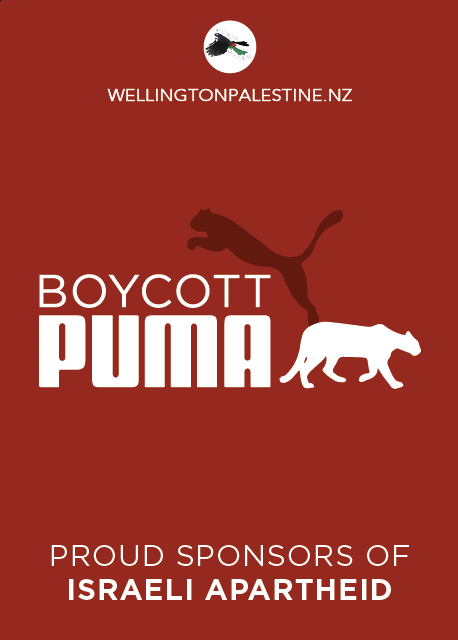 Permission to reblog this post is granted if you include the statement: “First published by Wellington Palestine (2019, 7 October)”